Governor of Shabwa province Ahmed Hamed  Lamlas discussed with the committee appointed by His Excellency President AbdRabbo Mansor Hadi, President of the Republic of Yemen, headed by the Undersecretary of the Ministry of Oil and Minerals, Gas Affairs Aws Abdallah Alaud,  on the oil sector, assessment and development of (suitable solutions)treatments and arrangements necessary to restart the oil sectors operating in the province,as well as a number of issues and topics related to Committee tasks and work in the province, such as the resumption of work in Blocks 4 and 5 and repair of crude oil storage tanks in the Alnshimah area and the transport tube of oil nourishing it extended from the area of Alalam to Alnshimah seaport in the Arabic Sea. 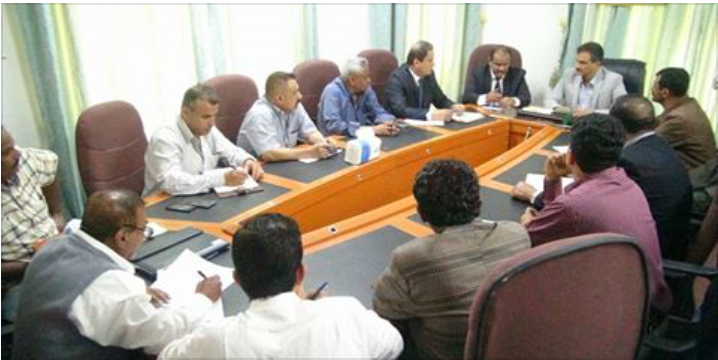 During the meeting it was agreed on a number of measures and actions that accelerate the resumption of work in both the sectors mentioned; Also stressed on strengthen cooperation between the Ministry of Oil and Minerals and operating companiesin Shabwa in one side and between the leadership of the local authority and considering it as full partner in the implementation and success of the plans of those companies; also was emphasis on the concerted efforts of everyone in order to ensure rapid resumption of work in the oil sector to maintain, create better working conditions, which represents the importance in supplying the national economy,thus the re-development wheel rotation responsive to the hopes and aspirations of the nation and the people in development and growth.

The meeting was attended by Assistant Undersecretary of the Ministry of Oil and Minerals Yusuf Ahmed Musaid and Assistant Undersecretary of the province Fahd Salem Altawsali and the YICOM GM Dr. Abdullah Omair and Block-4 GM Dr. Abdalraqeeb Alshudabi and GM of Oil and Minerals Bureau of the provinceSaeed Almrnom and GM of the gas office of theprovince Salem Bafayyad, Mr. Ahmed Abdan, Mr. Ahmed Alwali, Hisham Alfaqeeh and a number of technicians and specialists in the relevant authorities.

IT Department
© Copyright 2022, All Rights Reserved Yemen Company For Investment in Oil & Minerals