Exploration activities within the area stared in March1990, by TOTAL (former Operator) and then by JHOC (Current Operator).
Since the beginning of Exploration in Jannah 2495 Km of 2D seismic lines have been acquired and processed by CGG. The first Oil discovery was in September, 1991 by TOTAL, under YICOM supervision when the first wildcat, Jannah, 1, was drilled. It was announced that the well had struck gas, yield a flow of 12.36 million cu ft/day of gas and 600 b/d of condensate. Gas also encountered while drilling the second well, Sabatyn-1 in April, 1992.
Two more wells Halewah (1&2) encountered a major oil accumulation. Halewah-2 was tested at a rate of 5885 b/d and 4250 b/d of light crude in August 1992. In 1993 TOTAL, discovered Dhahab field. In October, 1994 JHOC became the operator for Block-5, and continued executing the 3rd exploration period, which ended in March, 1995 without any success to discover new fields. At the request of JHOC and Jannah partners to extend the exploration period for one year, YICOM represented the Ministry of Oil and Minerals demonstrated its understanding and willingness to assist the Contractor in its determination of the Commerciality of the Halewah Oil Discovery. 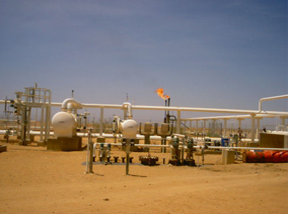 The Ministry of Oil and Minerals exercised its good offices with YICOM, which granted an extension of the third exploration period for one year. In recognition of such assistance the contractor agreed to the establishment of a Joint Operating Committee.
During such extension the operator JHOC announced the major Oil Fields discovery in September 1995 .
JHOC accomplished exploration and appraisal-drilling activities in the period 1995-1996 resulted of Al-Nasr and Aser field discoveries under YICOM supervision. In March 1996, the end of the third exploration period, the Contractor (Jannah Association) noticed the mandatory relinquishment for the areas generally consists of the entire remaining agreement area except the development area for the discovered fields. A total of 15 Exploration and appraisal wells had been drilled results in the discovery of the following fields:
¤ Jannah (Condensate).
¤ Halewah field (Oil & Gas).
¤ Dhahab field (Oil & Gas).
¤ Al-Nasr field (Oil).
¤ Aser filed (Oil).