Home / News / Mr. Ahmed Hamed Lamlas, governor of Shabwah discussed the security problems that are faced by the Company at oil sectors 4 and 5

Mr. Ahmed Hamed Lamlas, governor of Shabwah discussed the security problems that are faced by the Company at oil sectors 4 and 5

An important meeting has been held on Monday, March 06, 2017 at the Head Office of the Yemeni Investment Company for Oil and Minerals (YICOM), in the temporary Capital Aden.

At this meeting two main subjects were discussed, these include the security problems that are faced by the Company at oil sectors 4 and 5, as well as the main obstacles in the transport process between these sectors. This meeting was attended by His Excellency Mr. Ahmed Hamed Lamlas, governor of Shabwah, who has listened to a detailed explanation by Dr. Abdullah Omir, the Executive Manager of the Company about the security problems and all obstacles that hider resume production at sectors 4 and 5 which belong to the Company. Meanwhile, Mr. Hamed Lamlas was briefed on the progress of activity and the difficulties faced by the Company regarding transportation of crude oil by own transport vehicles for a distance of 85 kilometers.

Mr. Omir, the Executive Manager has asked the Governor to secure the pipeline that connects sectors 4 and 5 to Annashamah harbor and repairing of the pipeline connecting the harbor.  However, Mr. Governor has asked the Company to resume oil production, and instructed the security authorities to provide a security plan for the purpose of securing repairing the pipeline at sector 4 for the technical group specialist in repairing the pipeline, and has urged them to provide the security plan within ten days in order to discuss it with the oil sectors operating Companies in Shabwah Governorate.

The meeting was also attended by the General Manager of sector 4, Dr. Abdulraqeeb Ahmed Alshawdhabi, by Brigadier Khaled Yeslam, protection constructors commander of Jannah and Safer, and by Commander General 19, Alawi Ali Dahian. 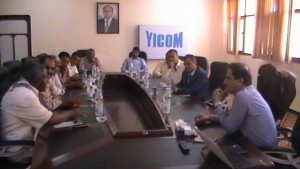